Now, in my defense, overnight we’d passed that logitudinal barrier such that we’re officially an hour ahead of you. Also, the majority of the vacation part of this cruise is being able to do whatever I want, so waking up at almost-11AM is something for which nobody gets to judge me.

At the same time, Bruno Mars’ “The Lazy Song” was basically my anthem this morning. I didn’t go to breakfast, I didn’t meet up with Wendy, Jen, or the Randys. I did basically-nothing for the first hour, but for the second hour, I did something I’ve been planning to do for weeks…

I wrote a blog entry earlier this year about how strangely protective I am of the contacts in my phone. I left feeling a bit internally conflicted about being so protective of a contact list that was so out of date. I knew that during this trip, I wanted to spend some time overhauling it. “Marvin”, a number that got added to my phone back from my Staples days, but never called, needed to go. Mosaic, a Greek restaurant owned by a friend but which I’ve never visited, need not be a contact. Amanda, Stephanie, and Valerie, two women I met on eHarmony nearly a decade ago but with whom I haven’t interacted in several years, no longer needed to be on my list. Alexandra, Jeff, Darrell, and a few others who have died over the past decade: their memory need be honored in how I interact with those who are living, rather than as a number that will never be dialed.

Nearly half of my contacts were people I hadn’t talked to in over five years. Some (like Valerie) are Facebook friends, others have decided to part ways with me. Lots of changed names; some people got married, others have been in my phone since “first name” was all that was needed, still others had legally change their names. I needed to make those changes.

It’s not all sad though; my friend Annie has been my friend for nearly four years; I never made her a contact. A few others share her story. Some people have gotten new numbers that I was happy to add. Back in 2009, my Windows Mobile phone used to automatically add Facebook posts to the contact information of linked friends. Some people still had information from that time in there; it was amusing to wax nostalgically at that time. I cleared most of them out, but some people I kept with the intent to share it with them when I get back home.

Once I finished with that, I straightened up my room; I am grateful for my housekeeping staff but there’s a difference between ‘having your bed made for you’ and ‘putting them in an awkward situation regarding your dirty laundry’. I then went to the main buffet dining area for some lunch; yes I’m on vacation but I’ve been consuming way too many calories to not get a salad or two. While here, I was shocked and excited to see my friend Stephanie and her boyfriend; it’s a very big ship and the law of large numbers says that running into at least one person I knew was probable, but I haven’t seen either of them in a while and it was a very pleasant surprise to do so. 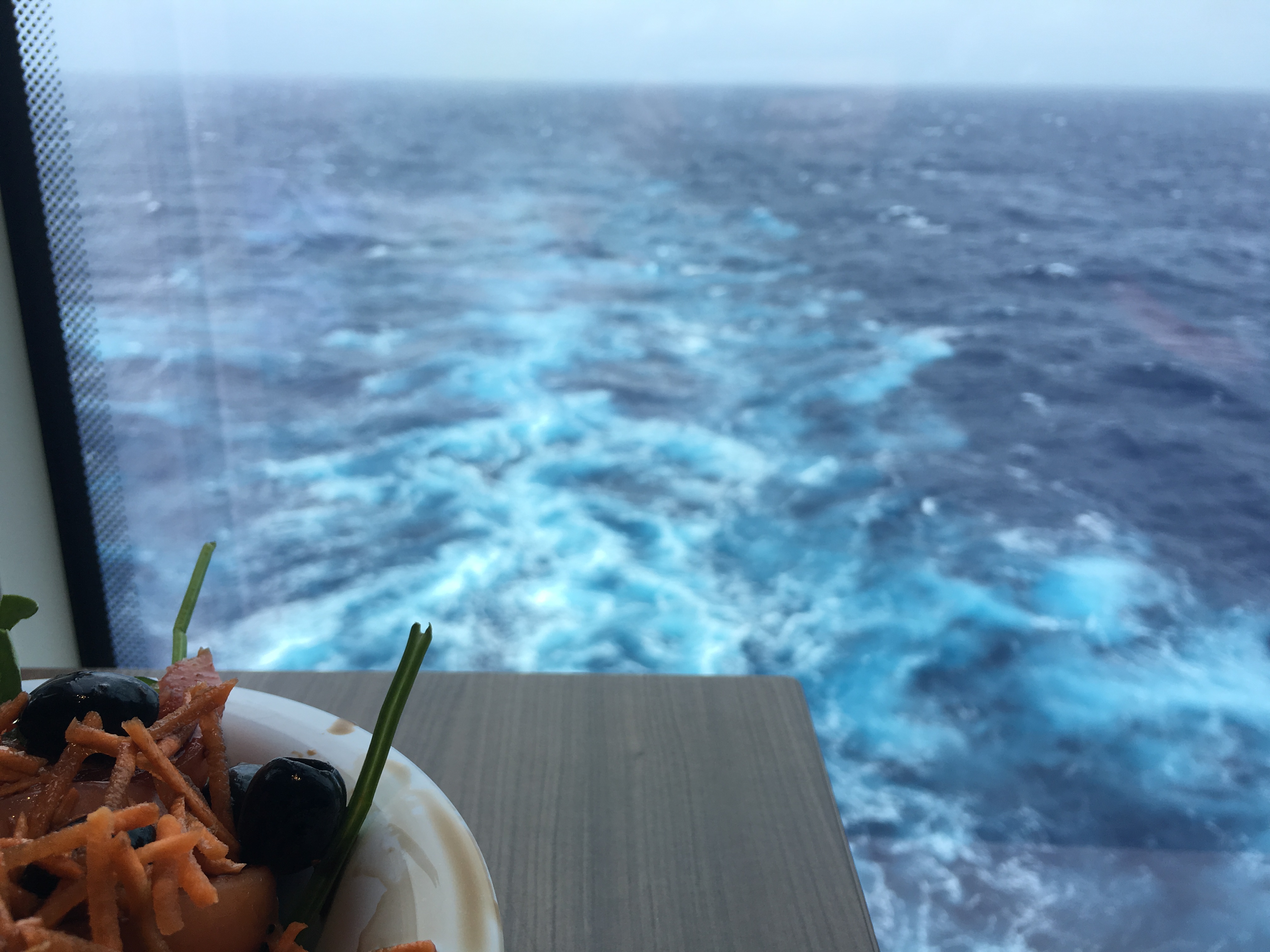 Wow…okay…so, what started as a lazy day definitely took a turn.

Stephanie and Greg left the buffet area earlier than I did, as I was finishing up my morning blog entry. They went to a trivia game, along with two other friends they were cruising with. I joined them a few minutes after. As it turned out, the host was Kareem, the same guy who coordinates the Solo Travelers program. Stephanie and I agreed that Kareem was doing his best, but that he lacks the skill of our friend Michelle, who has the sort of personality, wit, and stage presence that makes a trivia host truly entertaining. We ended up getting 14/24, which put us in second place.

After that, I had about an hour or so to kill, so I napped for a bit, and was out in time for the 5:00 meet-up. Wendy and Jen were there; both expressed that they were a bit concerned since neither of them had seen or heard from me all day. I briefly filled them in, and the meet-up began. “Tennessee” lady brought her entourage, who may not have been wearing “Rosé all day” shirts, but were most likely doing so. I felt a bit bad for Kareem as he tried to hold the attention of the room, but they certainly weren’t making it easy for him. Kareem did another round of trivia questions in the Solo Lounge with us…and about half of the questions were reused from the time before. AT&Team ended up with 12/17, in no small part because I remembered most of the answers from a few hours prior. Once he awarded us the win, I yelled out, “are you going to reuse questions tomorrow, too?”. He blushed, awarded me with a Norwegian Cruise Lines water bottle, and then told me that he promised not to recycle his question sheet tomorrow. We had a good laugh about it.

Wendy, Jen, and I had discussed going to one of the premium restaurants tonight. I’d tried to make reservations, but it was tough to find somewhere that had one available, on short notice, that wasn’t one of the two steakhouses (Jen is a pescetarian). We discussed it, and as it turned out, the French place seemed to have an opening at 6:30 that showed up on the screens, but not on the app. However, the screens are supposed to let me make a reservation, but didn’t. Strange. I ended up just calling the reservation line; I was amused that it took nearly four people to ask me to hold before I got someone to talk to. Even more amusing, that person said, “Just go to the restaurant and see if they have an opening”. Seems to defeat the purpose of a reservation, but whatever works.

The three of us went there and asked, and apparently they had an opening, but for an hour and a half later. We said ‘okay’, and then went to kill some time. Jen and Wendy got drinks at the bar. It was at that moment that I remembered there was a rum tasting on one of the other decks. Wendy was cool to people watch; Jen and I did some rum tasting.

The tasting was done by a Trinidadian woman who had just the most fantastic accent while also being very easy to understand. The tasting was basically sponsored by a single company; seven of their nine rum variants and mixed rums were available for tasting. One of those two was a 12-year aged rum they wouldn’t let us taste because the bottles are relatively rare, the other is 151-proof and isn’t allowed on the ship because it’s a fire hazard. The did let us taste all the others, and I was particularly a fan of their coconut one and their ‘gold’ variety, which tasted similar to amaretto. I wasn’t up for trying their 140-proof variety; 80 is basically my limit and I know it.

Jen and I enjoyed the demonstration and met up with Wendy when we were done. We sat and people-watched for a bit, then headed back to the restaurant, who did end up seating us.

The salad had good presentation, but could have been dressed a bit better. Jen had a mushroom soup she thoroughly enjoyed, while Wendy had a bowl of mussels she seemed to like as well. I ended up going vegetarian this go-round; I forget the exact thing it was but it involved a portabella mushroom, goat cheese, a bell pepper, and…maybe some eggplant? I forget, but it was absolutely delicious and just the correct portion.

The highlight of the meal, though, was the fondue dessert. I don’t know what it is about dipping fruit into chocolate that makes it about twenty times more enjoyable than if the fruit came pre-dipped, but we definitely had the most fun with it. As is common with fondue, the fruit-to-chocolate ratio wasn’t right, so there was leftover chocolate to be had. The fruit was served in a cut pineapple, which meant we had more pineapple to use for dipping. Now, the wait staff, skilled as they are, took away all of the cutlery that was on our table, except for the fondue forks. So, the ladies were laughing in amazement as I hacked away at this pineapple with a fondue fork, slowly but surely cutting off one edge section at a time. “We can ask for a knife”, Wendy offered…but I’m sure that exactly none of you reading this believe that I took the practical or expeditious route on this. I did end up getting the pineapple cut, and enjoyed it the most.

I left pretty much right after that, because Stephanie invited me to join her group in one of the bars where a particular entertainer was playing, known for his style and humor. He played a number of ‘bar classics’; “American Pie”, “Sweet Caroline”, “We Are The Champions”, “Wonderwall”, and of course “Piano Man” had the whole bar singing along with him. However, I was impressed with how he did everything else. At the behest of one woman who requested Taylor Swift (but it was ‘for her husband’, who was apparently a Marine for 22 years), he played Shake It Off, and did pretty good. F.U.N.’s “We Are Young” was also played, as were a few other pop tracks. However, the draw were his satires and original songs. “Old MacDonald’s Deformed Farm” was a stand-out; this farm had a “stuttering cow” with a mm-m-mmmm-mmoooo mmmmm-oo here…”, a dyslexic sheep (with an aaab aaab here…), a drug-dealing duck (with a crack-crack here…), and several other not-PG-rated animals, he had the bar in stitches. I was super torn about him playing “My Neck, My Back” because it’s literally the dirtiest song I have ever heard played at a party, but his rendition was incredibly skilled, and while *he* sang the radio edit, the crowd had no problem filling in the blanks for him. He played Shaggy’s “It Wasn’t Me”, which floored me because he actually knew the lyrics to the Shaggy part that’s very difficult to understand. However, the absolute standout of awesome to me was his beatbox. He did a beatbox of about five different songs, in a dubstep format, complete with the vocal distortions, basslines, tempo changes, and even vinyl record scratching sound effects. Did I mention this was all a beatbox? Being a good bar pianist takes practice, being able to an incredibly difficult vocal performance that effectively? That’s legendary.

We dock in Bermuda tomorrow morning. Do you think I’ll manage to be awake at 7:45AM to watch it and take pictures for you? You’ll have to wait until tomorrow afternoon (or something) to find out….